Join a voyage filled with fascinating stories – telling us about ancient history, cultural legends and natural wonders! We will enjoy humpback feeding grounds, Norse history, Inuit culture, hot springs and geological wonders. Our trip stretches from the ice-crowned north to the jagged mountains and green pastures of the south, resulting in a large variety of nature, wildlife and culture! The ice, land and nature we sail through will be given another dimension when seen through the prism of myths, legends and history of Inuit and Norse settlers, all shaped by its harsh bounty and beauty.

Travelling with a small group of merely 12 passengers gives us flexibility, unique itineraries and more time ashore. Also, the footprints we leave behind are a lot smaller! We get to visit remote settlements, meet the welcoming people living here and in a personal way learn more about their fascinating culture. The M/S Balto has a lot of experience of and is designed to explore the most remote fjord systems and take you to secret anchorages. This is true micro cruising.

Please note that this is a German speaking departure.

We arrive to the town by the ice fjord, Ilulissat. Immediately upon arrival, we are struck by the natural beauty that surrounds us, with hills, glaciers and a bay filled with icebergs. The remoteness from our everyday life is obvious!

In the afternoon we board M/S Balto. We are now on a voyage in true expedition style and our exact route is depending on weather and ice and the itinerary must be kept flexible!

We sail through a field of ice across the Disko bay and continue south towards Aasiaat, whose small colourful houses greet our eyes. As we continue south, we are constantly on the lookout, since we are very likely to sail through humpback feeding grounds.

As we continue via an inland passage towards Sisimiut, we sail amongst small islands, fjords and cliffs and pass a couple of remote villages on the way. Sisimiut is the second largest settlement in Greenland, with approx. 5600 inhabitants and its name can translate to “living in a place where there are fox dens”. We might pay a visit to this town, to wander the streets, visit some shops or the museum, or we might opt for the surrounding wild fjords with an abundance of cod and various whale species. During hikes we are likely to see reindeer, musk ox and foxes.

As we now leave the ice-filled fjords behind, only random icebergs will pass our way. The areas we enter offer much deeper fjords teeming with marine wildlife and birds.  We pass by Sermersuut Island, where huge mountains rise straight from the ocean, to then enter another beautiful inland passage on our way towards Nuuk. The capital’s setting is stunning, and the bay is usually full of minke and pilot whales. We pay a visit to the National Museum, Greenland’s largest museum of cultural history. The collections come from all over the country, brought from various archaeological and small museum displays over recent years and the visit gives us great insight into the many different cultures of Greenland.

Our journey continues south towards the fjords around Qaqortoq. En route we might stop by the abandoned mining town of Ivittuut – one of the few places in the world to have discovered naturally occurring cryolite.

Nearby is the Ikka fjord. The legend says that invaders was driven out on the thin ice by the Inuit people and when the ice gave way, the invaders died in the ice-cold water. If you look down through the waters, you can catch a glimpse of their petrified remains on the bottom. The figures on the bottom are made of ikaite, an unusual form of chalk or limestone that is formed under an enormous pressure. Only about five other findings of ikaite have been observed around the world.

The places we are travelling through on this voyage have many stories to tell. One is of the Inuit's great respect of and symbiotic relationship with environment and animals. Also, a story of climate. During periods of weather change and animal numbers declining, amulets and fishing or hunting artefact became objects of great beauty and artistry. Of respect and love for the animals, who give themselves to sustain the Inuit life and culture, offerings are made to the Sea Goddess Sedna, to release the animals’ souls. Still today, Inuit carry a small jug of fresh water when hunting seal. After a seal is killed it is given fresh water, so its spirit will not go thirsty. We will have many opportunities to learn about stories and legends, different eras and people that migrated to Greenland, conflicts and the ultimate demise of the once powerful Norse civilisation.

We arrive to Qaqortoq, the largest city in Southern Greenland, beautifully situated on the mountain slopes and surrounded by fjords. We venture into Eriksfjord, named after Erik the Red, a Norse explorer believed to have founded the first settlement in Greenland.

But this part of Greenland offers much more than history, museums and Norse ruins! It also invites us to natural hot springs, bird cliffs, remote islands and deep fjords characterized by high mountain peaks and playful whales. We will explore the area’s hot springs and enjoy a bath in these warm-tempered natural bathtubs, with breath-taking views of mountain peaks and drifting icebergs.

At the end of Eriksfjord is Narsasuaq, where we disembark for homebound flights.

On this expedition cruise you travel with two experienced German speaking guides and the language on board will be German. Since we are a Swedish based company, your booking confirmation, forms and predeparture information will be in English.

PolarQuest places all revenue in a bond with the Legal, Financial and Administrative Services Agency until the completion of your expedition. Read more here. 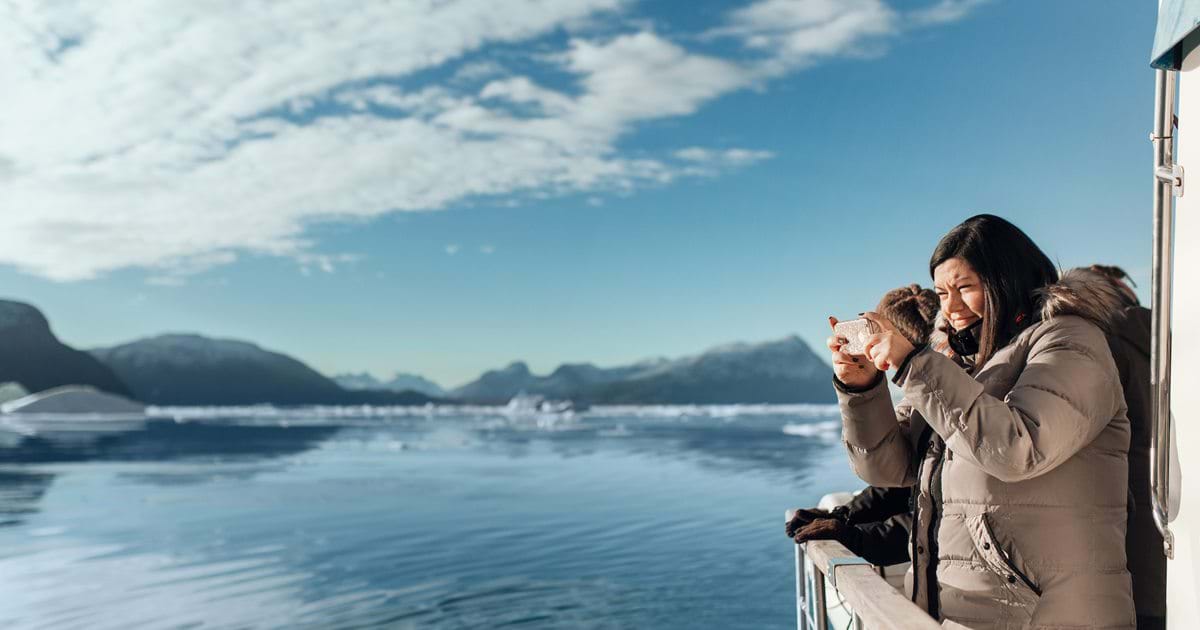