Experience Greenland’s untamed wilderness with the elegant 12-passenger ship M/S Balto, designed to explore the most remote fjord systems, visit isolated Inuit settlements and take you to secret anchorages. Greenland’s spectacular coastline offers some of the most remarkable nature experiences. The Arctic landscape is dominated by ice-filled fjords, majestic peaks and vast tundra. You can enjoy Zodiac cruises amongst icebergs in all shapes and sizes, admire glistering glaciers, take a dip in a hot spring and head out on refreshing hikes. The wilderness is also home to a rich and diverse wildlife, including whales, Arctic foxes, seals, polar bears and the iconic musk ox.

Experience our trips to Greenland

Greenland, known as Kalaallit Nunaat in local Inuit language is the world’s largest non-continental island with a size equal to about half the size of Europe and a just under a fourth of the total surface area of the of the United States. It stretches over more than one climate zone, from the 83rd parallel in the north to the 59th parallel in the south and due to its large amount of complex costal fjord systems, has a total longer than the equatorial distance around the planet.

Situated in the Arctic and Atlantic oceans, surrounded by a complex current system, the island is one of natural contrast, hosting all from deep fjords, glaciers, hot springs, grassy meadows and towering mountains. The island is also home to the Greenland Icesheet, the second largest ice sheet in the world after the Antarctic, the world’s longest fjord system and National Park.

Aside from almost otherworldly natural beauty, what really sets Greenland apart is the warm and welcoming Inuit population, the proud people that calls this amazing island their home.

The first people to inhabit Greenland was indigenous Inuit people from Arctic Canada, who crossed the then frozen Thule strait. No less than 6 different Inuit cultures have immigrated to Greenland from the west, over a period of several thousand years and the Greenlanders on the island today are descendants from the last Inuit immigration, the Thule people, in 9th centaury AD.

Around the same time, the first Norse settlers arrived in the southeast part of the island. Erik the Red, exiled for three years from Island sailed east and explored the southern parts of Greenland. Upon his return to Iceland, he called for settlers to join him in creating settlements on this new island, which he referred to as Greenland. The Norsemen settled on the island and lived in small settlements scattered on the south coast for a period of a few hundred years. Why the settlements of Norsemen vanished from Greenland is not fully known but theories from a change in climate to altercations with Inuit population and changed trading opportunities exists.

In the mid 1700 hundreds Danish-Norwegian rule claimed the territory and colonized the island. The island remained colonized under what later become the sole Danish crown, until 1953 when Greenland instead became a constituently of the Danish Kingdom. In 1979, Greenland home rule was established and in effect till 2009 when a Greenland self-government replaced the home rule government.

Although considered remote in world geography, Greenland also played an important strategic role during WW2, where several weather monitoring stations were established throughout the island and stations established where planes for the allied forces could refuel. Today, a large American airbase and radar monitoring station is still operational in Thule and remains of older stations are still visible around the island.

The total population in Greenland is a mere 56,000 people, mainly concentrated on the west coast and in its capital city Nuuk, home to roughly 20,000 people.

The 16 small towns and 60 small settlements scattered along the Greenlandic coastline is home to those not living in the capital city.

The population is, to a large extent (88%) Greenlandic Inuit and a small part of the population are Europeans, mainly Danish. Much of the people in Greenland speak the Inuit language of Kalaallisut, also known as West Greenlandic, whereas in the east and far north, variations of the language are spoken.

The east coast of Greenland is still home to many Inuits living as traditional hunters whereas life in the towns of the west is becoming more urbanized with more education and work opportunities.

Although living in a harsh and landscape, Greenlandic people are amongst the most warm and welcoming people in the world, a people with strong traditions and pride in their heritage as well as much curiosity of the outside world.

There is no wonder the Greenlanders have over 50 different words for snow and ice. Contrary to what the name suggests, Greenland is by 84% permanently covered under ice, namely the Greenlandic Icesheet. This is the world’s second largest freshwater reservoir, locking in just under 10% of all the world’s fresh water. On the east coast, several rocky mountains- known locally as “Nunataks” protrude the icesheet which at its deepest reaches a thickness of over 3000 meters. All around the coast, the ice from the icecaps spills over in glaciers which drain the ice from the icecap into the ocean, in calving lose large pieces of ice, icebergs. It is widely accepted that the large iceberg which sank the Titanic calved from the Kangia glacier in Western Greenland, which also was the area in which the largest recorded calving in the world occurred in 2012, when an area equal in size to that of Manhattan, broke of the glacier.

As well as glacier ice, pack ice is prominent in the waters around Greenland in the winter and spring months. Down the east coast, large areas of the cost and fjord systems can be impenetrable due to sea from the Arctic Ocean, well into the early summer months.

Greenland is home to seven species of terrestrial mammals, most notably polar bear, muskox and Arctic fox, as well as six species of seal which can be found around its costal regions. The waters are home to several species of whales, most commonly humpback, fin and minke whales.

The landscape is much varied between the three main regions of Greenland.

The east coast is jagged with dramatic mountains plunging steeply into narrow fjords, often filled with icebergs from calving glaciers. The area is remote with only a handful of small colorful settlements, home to Greenland’s highest peak of over 3000 meters, Mt Gunnbjörnfjeld, and the world’s largest national park, The Northeast Greenland National Park. The northeast is the main home to polar bears and muskox.

On the contrary, the western part of Greenland is considered relatively flat with enormous outlet glaciers which produce the largest icebergs in the northern hemisphere, home to several fishing settlements and Disko island, a volcanic island different to the rest of Greenland, outside of Ilulissat, the city of Icebergs.

The south of Greenland is home to much varied terrain with narrow fjords and jagged mountains but also to much Arctic shrub vegetation and wildflowers. This is a popular area for muskox and Arctic fox and it is also the area of Greenland with the most European historical sights, remains form the Norse Culture.

Birding in Greenland is not something to be taken for granted. Although an impressive list of 235 species is recorded, about two thirds of such have only been recorded once. Main species normally observed includes fours species of gulls, the northern fulmar, great shearwater and some species of geese.

Winters in Greenland are long, dark and cold and the whole landscape is blanketed under a thick layer of snow and ice. Northern Lights are seen most nights as the weather is often clear and stable, with the occasional “Piteraqs”, catabatic winds with windspeed of up to 80kmph, generated from the gigantic ice sheet. Temperatures can easily creep down to negative 20 /30C dry cold. In the deepest of winter months, the sun doesn’t rise over the horizon and its constant polar night.

When spring arrives in March early April the days are getting longer and the temperatures milder. Sea ice is still locking most of the eastern coast but in the west, it starts to loosen its grip. The low sun makes for beautiful sun sets and sunrises, bathing the landscape in golden and purple colors.

As spring turns into summer, the unglaciated costal landscape turns green and especially in the south low shrub bush and Arctic flowers bloom. Temperatures are a comfortable 10-15C and days are long with usually stable calm and clear water.  With the warming temperatures come increased calving of icebergs and fjords such as Sermilik fjords in the east and Kangia in the west, are littered with icebergs in all different shapes and sizes.

As autumn approaches, the vegetation turns orange and often the higher mountain peaks are dusted with the first winter snow. Temperatures are dropping and days are getting shorter. From September it is possible to see northern lights dancing in the sky above.

The relatively small coastal area of Greenland that is ice-free is home to a variety of almost 500 types of vascular plants, grasses and lichens. In summer, especially south of Greenland lives up to its name. Lichens in yellow and orange are common sights on the gray or black rocks and in late summer and autumn much of the vegetation turns into red carpets on the mountainsides.

Our ships in Greenland 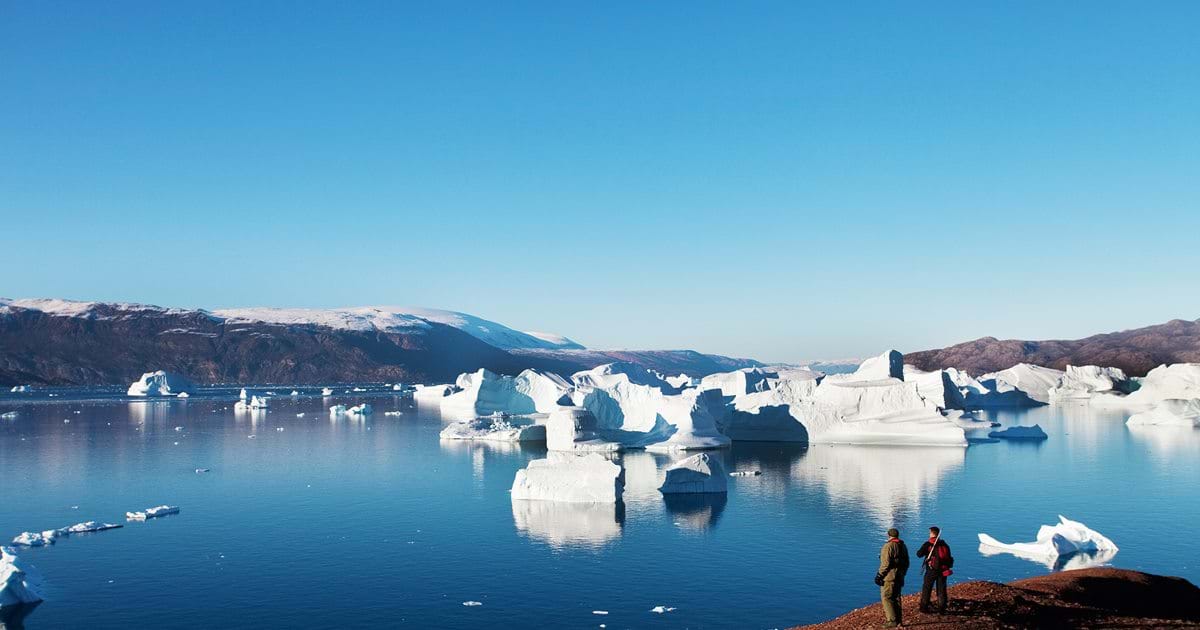